Our new P1 classes enjoyed their first day in school this week.  Everyone said they had a really great time!

Ross: ‘I was excited because I love coming here and I couldn’t wait to see my friends’

Niamh: ‘I was excited about what letters I was going to learn’

P5 were delighted when they came back after the holiday to see their wonderful wild flower garden at the front of the school.  They planted the seeds before the holiday and the flowers have obviously enjoyed all the rain over the summer!

Miss Cotter spent a very enjoyable weekend on the Isle of Eigg during the school holidays on a networking course with the Speygrian Trust who bring together teachers, writers, artists, musicians and scientists to explore creative approaches to outdoor learning. Through formal workshops and informal discussions, people from a wide range of backgrounds are encouraged to share ideas and learn from each other.

As usual, she gathered lots of exciting ideas for using our outdoor environment at Mid Calder Primary School.

Congratulations! Your Fairtrade School status has been renewed for another year. You will be sent an updated certificate shortly. Thank you so much for your continued support in helping to bring about a better deal for farmers in developing countries and a more just system of international trade. Keep up the good work as you will need to renew your Fairtrade School status again in a year’s time. Aaron, P7B won the National Burns Federation prize, Sam P7 A came second and Declan P7B was a runner-up. Pupils  got a certificate and the school received a cheque for £100. The president of the Burns Federation was extremely impressed with the high level of excellence within the projects.

On Friday Frank Clement, who raced in the final of the 1500m in the Montreal Olympics and came fifth, visitied the school to talk at both assemblies about his running career and what it was like to take part in both the Commonwealth and Olympic Games. Mr Clement gave a really interesting presentation and the photographs below shows Tom P4, wearing the Olympic vest, Louis, P5 sporting the Commonwealth vest and Kaitlin, P6 with a medal. Photos from P1 to P3 Assembly Find out what is happening in our school 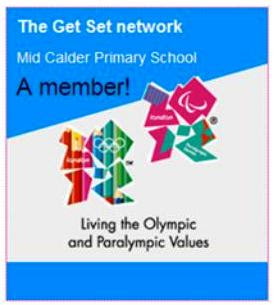 We are working towards our 4th Green Flag