Days in the life of a new Geography teacher. Or as Neil puts it:

“The rantings of a Geography teacher on probation at North Berwick High for session 2006/2007. Find out what its like on the bottom rung of a very slippery ladder, as I share my thoughts and experiences with the world.”

Eliza Sparks, a parent volunteer supporting the Humbie After School Care Club as their special projects manager, shares with you the ideas and information shaping their project via her new Taking Care: Our Environment, Ourselves weblog.

“We are currently preparing funding applications for our “Taking Care: Our Environment, Ourselves” project. Thus far, the response to our ideas – by our, I mean the Humbie After School Care Club students, playleaders, committee and volunteers; the Humbie Primary School Student Committees (Health and Eco-Environment); as well as my own research into outstanding initiatives and projects from schools around the world – has been wonderfully enthusiastic and supportive. We might be one of the smallest primary schools in East Lothian, but, as ever, we have big ambitions.”
Read the full post here.

The ink on the first few posts has just about dried now. Why not drop by and take a look? You might even be able to help. Eliza says, “Feedback, comments, suggestions are very welcome!”

Today’s Stern Review on Climate Change includes this really powerful graphic as part of the slides for launch. This topic is important already within subjects such as geography and science, and has huge potential value as an alternative curriculum resource. Maybe it’s time to start tagging stuff that’s clearly useful for cross-curricular projects? The sheer volume of web resources is so high, anything that helps separate out the really good material could save teachers and students a lot of time. For example, I’ve tagged this in del.icio.us with the tags climatechange, impact, education, resource and graphic – and included some words to point people to the graphic:

Preston Lodge High School doesn’t currently have a web site – but that’s about to change. I met up with some of the people involved today. Interestingly, despite not having a site just now, they were unanimous that the school site they want needs to be one that isn’t just a dull electronic equivalent of a notice-board. There was a real recognition that students had to have a voice on the web, not just “the school”. END_OF_DOCUMENT_TOKEN_TO_BE_REPLACED

I’d a quick meeting with Anne Johnstone from DGS today about development of the DGS web site. Like Musselburgh Grammar, Dunbar are wanting to move the site on to make it more interactive, and to include more student input. With Ollie Bray, we’re now planning to get some collaboration going – and maybe even some healthy competition! – between the students at both schools. 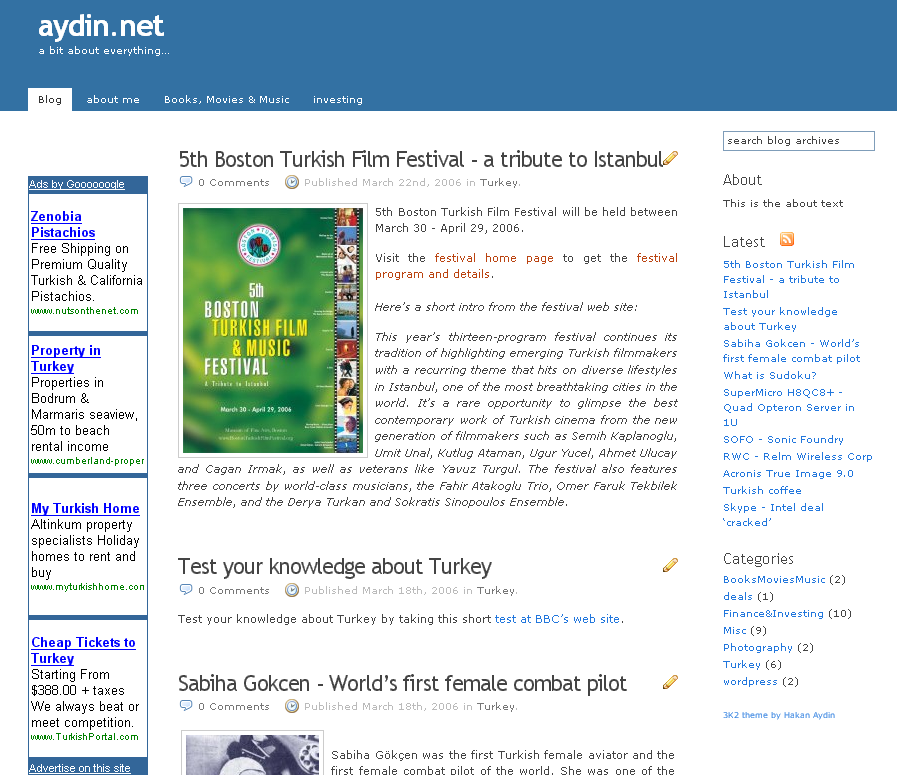 There’s now a 3-column theme – this one, 3K2, as used by jonesieboy – available, and some plug-ins, including Automattic’s sidebar widgets and the Democracy survey plug-in. Use the Plugins menu in the admin interface to select and activate available Plugins.

I had a look through Jennifer Moon’s book Learning Journals while in a bookshop at the weekend. For some reason, it hadn’t occurred to me that anyone might have written such a book. (I guess they hadn’t: it sounded like she’d written it to plug the gap.) The thing that really struck me about it, knowing what I do about blogs, is the extent to which blogs could support the various kinds of activities described in the book – see Amazon synopsis below. END_OF_DOCUMENT_TOKEN_TO_BE_REPLACED

Tonight I was trying to find out about
Microsoft’s Virtual Classroom Tours , as I&apos;m talking with Emma Griffiths tomorrow about these in relation to her role on the
Innovative Teacher Program . They&apos;re packages based on PowerPoint. I had a look in one about
Designing a Room and found it contained an interesting short note on the thinking behind the idea. It pointed to the work of Michael Fullan, one of
Microsoft’s International Advisory Board Members .

It sounded like he was on the same wavelength as Exc-el, so I had a look to see if I could find out more about his work. I found his web site,
www.michaelfullan.com , is a good resource. It includes downloadable
articles, for example. He has authored a number of
books, one of them with Andy Hargreaves who spoke on
“Success and Sustainability” at SETT . It&apos;s a small world!

Here&apos;s an extract from one of the articles, which he&apos;d co-authored for the Prime Minister&apos;s Delivery Unit, which made me think of Exc-el: (http://www.michaelfullan.com/Articles_05/Tri-Level%20Dev%27t.pdf)

“…Beyond this, system leaders have a special responsibility to foster and support crosssystemnetworks where people across a region, state or country learn from each other.When done well this has significant payoffs for sustainability. First, people are able to learn directly from other practitioners. Second, people begin to identify with larger parts of the system beyond their narrow interest group.”

WordPress Multi-User is now working here
https://www.edubuzz.org/blogs. Testing yesterday didn't identify any problems, so we'll be starting to migrate
existing blogs over the next week or so.

East Lothian learners – including teachers, students, support staff and parents – wanting a new Exc-el Edublog there can sign up
here.

If you've got an existing Exc-el blog why not sign up and have a play? The blog names will look like this: https://www.edubuzz.org/yourblogname. Ideally the name should relate to what your blog's about, and be memorable, if it's to help build up your audience. Don't abruptly stop your existing blog, though. It's important that your audience are told what's happening, and get the information they'll need to change any feed subscriptions they may have. At the very least, your last post in the old blog should:

We'll be helping you with this process as part of the migration.

This is going to be shorter than it was -I've just lost version 1 after getting a worm protection pop-up message!

Today we've put a new
Home Page in place, with menu options for the
main Exc-el site and (less prominently) for
WordPress Multi-User (WPMU) testing . By using a piece of code from the WordPress forum, we've been able to get both eZpublish and WPMU running.

That's the good news, but testing this morning showed that a bit more work is required.. I guess it was a bit optimistic to hope that the WordPress forum code would fix it (WPMU makes use of URL rewriting for the blog names)… but if it worked, it would have saved a lot of time. Spent this afternoon getting up to speed on the
"voodoo" command syntax , and it's now starting to make some sense. Now I know how Alan will be feeling
learning Polish . We can get a log of everything it's doing, so it's all do-able, just tedious. Still worth it, though, to get elegant – and easy to use and remember – blog URIs like blogname.exc-el.org.uk and not blogname.exc-el.org.uk/wordpress, for example.

Met with Ewan on Skype to discuss development of the site. This is just such a useful tool – perhaps we should consider a pilot of Skype on some school PCs? I see that Vicki Davis has an
intro to the use of Skype in the classroom , aimed at new users, on her
Cool Cat Teacher blog. What do you think?