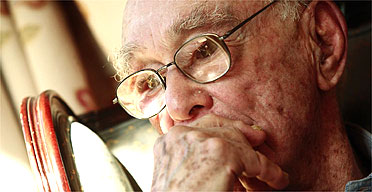 I felt enormously privileged today to be able to attend the Tapestry Conference in Glasgow to hear Jerome Bruner give a spellbinding performance.

For a man born in 1915 (93 years ago) he displayed humour, warmth and humility which would bely most men half his age – quite aside from his iconic intellect. In what was a wide ranging personal perspective on “A Curriculum for Excellence” he flitted through the decades, continents and historical fugures which whom he has engaged.

The strand to which he kept returning throughout his 50 minutes was the need for teachers to engage children in real thought by encouraging them to challenge and ask the tough questions – not just those which are part of the agreed syllabus.

He urged us to reflect upon controversy through a dialectic:

Dialectic (Greek) is controversy: the exchange of arguments and counter-arguments respectively advocating propositions (theses) and counter-propositions (antitheses). The outcome of the exercise might not simply be the refutation of one of the relevant points of view, but a synthesis or combination of the opposing assertions, or at least a qualitative transformation in the direction of the dialogue.

In contrast to Piaget, Bruner has always fought shy of the stages of development and believes that children of any age can participate in such dialogue to make meaning of their world.

However, it was his phrase “The dialectic of the possible worlds” which struck such a chord with me.  I suppose in my own small way I am trying through this Learning Log to explore opposite worlds.  Through the power of the web it can become a dialectic which leads – at the very least – to a transformation in the direction of my own dialogue.

Given my last post about the Dark Forces – I think it’s vitally important that we encourage and support teachers to explore opposite worlds in terms of their own practice and the nature of the curriculum and then participate in a professional dialogue about these possibilities. Without such a dialogue we are trapped by dependency culture created by centralised teaching programmes of study and curricular materials.

2 thoughts on ““The dialectic of possible worlds””