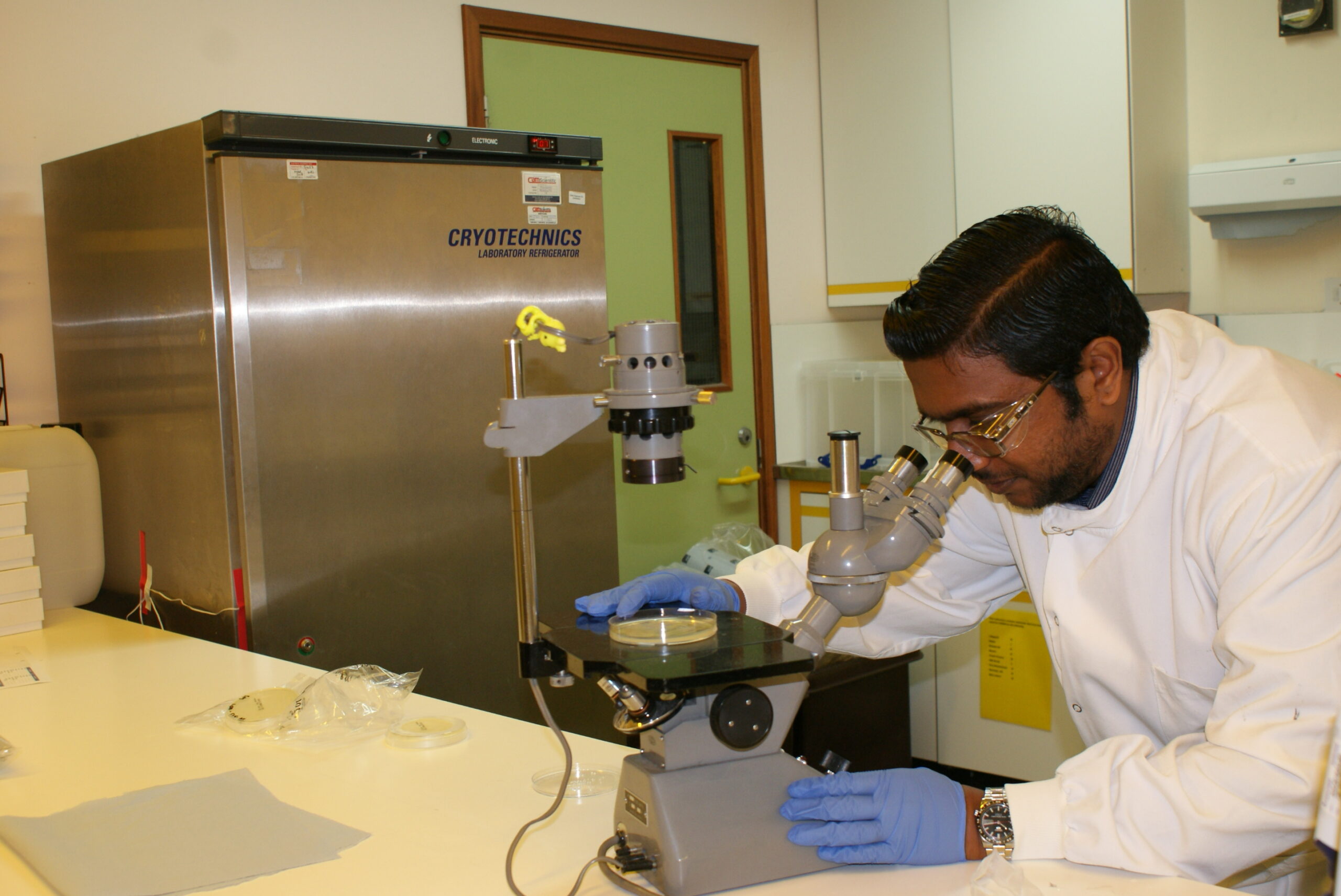 I arrived at Charles River Laboratories bright and early on the morning of the 1st of May. Upon my arrival I was warmly welcomed in to the main reception building by Stephen Madden – the Head of Regulatory ADME and Discovery Sciences. My main goal was to learn a bit more about the world of lab-based science, in order to aid those undertaking, or considering undertaking, the Foundation Apprenticeship in Scientific Technologies.

Charles River itself is an incredibly large site near Elphinstone, taking up a significant amount of land. It was a little intimidating at first, however all members of staff were incredibly welcoming and supportive They were even having a cake day! The team I was spending time with consists of almost fifty members of staff, but everyone appeared to know each other, and it seemed like a really tight knit group.

During my visit I sat down with Stephen Madden to ask him a couple of questions, in order to get a sense of what Charles River Laboratories is all about. From this interview, I learnt that the company operates all over the world, with locations in most continents, helping small and large corporations develop new medicines and other products that will improve people’s lives and wellbeing. Stephen’s day tends to consist of a variety of items, such as:

Stephen is also a member of the Animal Welfare and Ethics Review Committee, which sees him contribute to discussions both locally and nationally. He also mentioned that, although he delivers training to his team, Stephen himself also attends regular training sessions, as it is important that all members of staff are always up-to-date with the industry. On the day I visited Charles River, Stephen’s day was filled up mainly with interviews for new positions, as they are currently looking to hire quite a few new members of staff.

Stephen himself followed a traditional path into the science industry. He left school after S5 to study Biochemistry at Glasgow University. He enjoyed this enough to go on to a PhD at Liverpool University in Pharmacology. Eventually, he started working at Charles River Laboratories as a Trainee Study Director, where he has now been for more than twenty years. It was interesting to see the many different paths that the staff took to get to their current job positions. During the short time I was at the laboratory I met those who had undertaken university degrees, those who had started work straight from school, and Modern Apprentices.

When asked what his favourite part about the job was, Stephen said it would have to be seeing other people achieving their career goals, especially seeing those coming in who don’t know what they want to do as a career, and eventually finding their passion in the science industry.

Gandi and Kirsten, a Study Director and a Senior Assistant Scientist respectively, were kind enough to answer some of my questions:

How did you get into the science industry?
Gandi: my degrees were in the field of biomedical sciences, so it was an obvious step to stay in the science industry for my career.
Kirsten: I studied zoology and during this time I enjoyed working in the lab environment, so I was keen to pursue this once I graduated.

What does a typical day involve?
Gandi: A typical day involves discussing with clients on the type of experiments that they would like to do with their candidate drug, interpreting data, conducting statistical analysis, growing up bacterial cultures, and lab-based work.
Kirsten: Working on a variety of different studies in the laboratory environment; this work could include completing experiments, calculations and data analysis, writing reports, and communicating new ideas within the team.

What kind of students do you tend to see on placement at Charles River?
Gandi: I tend to mostly see secondary school students.
Kirsten: Motivated students that are keen to pursue a career in science and are happy to learn.

What skills do you think people need to work in science?
Gandi: Patience, organisation, and critical thinking.
Kirsten: To be meticulous about their work, think outside the box, be flexible, as well as organised. You also need to be able to get along with many different people each day.

What do you think are the best parts about the job?
Gandi: Realising that I am contributing towards the cure of a disease.
Kirsten: Knowing that you are helping to work on new drugs that can go on to help many people and animals live lives better.

What do students get out of having work experience in a laboratory?
Gandi: An impression into the daily life of research and they also get to see how their scientific knowledge that they learn in school gets translated into real life research.
Kirsten: They get to see hands-on how an industrial laboratory works and what kind of work goes on. They get to participate in their own laboratory project and work with experienced scientists.

What advice would you give to students wanting to get into a career like yours?
Gandi: Get a good understanding of the basic science subjects at school (biology, chemistry, and physics). They are very important to understand more complex concepts in the future.
Kirsten: Stick in at school with science subjects to grasp a good understanding to build on when moving into apprenticeships, work, or more education.

I would like to thank Stephen Madden and the entire team at Charles River Laboratories for having me for the day, and for answering my many questions! If you would like to find out more about Foundation Apprenticeships, have a read of our blog post here. If you’re interested in getting involved, speak to your guidance teacher for advice and/or an application form. Any questions can be sent to vocationalopps@eastlothian.gov.uk.