For 2017-18 The Outdoor Learning Service launched the Adventure Academy.  A county wide outdoor activities ‘club’ for S2.  Pupils from Tranent, Musselburgh and Dunbar secondary schools have just completed their first term’s programme of activities.  These included watersports, indoor climbing (working toward their NICAS award) and some outdoor cooking.  Then at the beginning of the month the group planned and then climbed Ben Vrackie a Corbett  in the southern highlands above Pitlochry.

Next term they will progress through their NICAS levels at the local climbing wall, gain a first-aid qualification and we have some more winter adventures planned including a residential to the Cairngorms where the pupils will get to grips with some of the highest and wildest mountains in Scotland.

We still have spaces on this programme for Term 2 joiners. So if you have any S2 at your school who could benefit learning new skills, growing in confidence and resilience then please contact aduff@elcschool.org.uk Based at Badaguish, staff began the week with an Avalanche Awareness CPD day and were joined on Wednesday by seven S2 and S3 students from Musselburgh Grammar. The unusual lack of snow cover in the area meant that skiing was off the cards, but students good-naturedly overcame their disappointment and took to hillwalking in difficult conditions with gust-o!

(photo to be inserted)

On Thursday they battled their way against the wind along the Sugarbowl path, climbed icy boulders through Chalamain Gap and summited Creag a’Chalamain. Having determinedly found one of the few areas of snow, they practiced creating snow steps with winter boots and ice-axes and of course some snow sliding! After stopping for refreshment Cairngorm-style, the girls breezed back to the bus with the wind behind them.

(photo to be inserted)

On Thursday evening, in the darkness of the forest at Badaguish, the students went hunting… for us! Practicing the use of transceivers (ordinarily used for avalanche rescue) and working in teams, they successfully tracked and found the unfortunate staff being hunted through the trees. Adrenaline was certainly flowing and great fun was had on both sides.

In contrast, Friday was a beautiful sunny day. A brief scramble up a steep slope was followed by leisurely walk among the ancient Caledonian pines, emerging at the magical Green Lake – An Lochan Uaine. From there we headed up to Ryvoan bothy for lunch, a fire and smores – hopefully worth carrying a share of firewood for!

After lunch four of the group with a taste for an amazing view climbed Meall a’ Buachaille. The other three students wound their way through the pine forest on the far side of the Lochan to try their hand at slacklining between the trees. Their advice: “Focus on the furry pompom of the hat ahead!”

Thanks to Mr Brown for all his work, for making this trip possible and for recruiting such a great group of winter walking women! The ML is a one of the Mountain Training’s top level awards and requires a significant commitment in time and effort.  To gain this award you are assessed in a variety of aspects of mountain leadership including night navigation, environmental awareness, land-access, group management and safety on steep ground using a rope.  Plus you need to build a significant log book of evidence of your experience in  the mountains.

With this award Lizzie can now lead groups on trips into any of the mountainous areas in Britain from Snowdonia to Ben Hope, from Ben Nevis to Mount Keen – and everywhere in between.  Whether supervising DofE groups, or enhancing her delivery of Geography this qualification will be a great asset for Lizzie to teach in the outdoors – anywhere! Top job. A group of Musselburgh Grammar pupils led by Pam Glennie have been challenged on a progressive series of adventurous outdoors sessions through November and December delivered by East Lothian Council Outdoor Learning Service.

They started out with an indoor climbing session, progressed to a very bracing gorge walk (brrr the water was cold),  next a paddling session on the Levenhall lagoons; no-one had a swim :-).  Last week  they had an indoor morning where they all gained a First Aid certificate (pictured above).  On Tuesday we visited Ravensheugh Woods where we made a camp, boiled water for hot-chocolate and enjoyed some festive mince-pies.

There is one final session in January. Not daunted by the cold the pupils have voted to do another water based activity … so conditions willing we’re off to canoe the mighty  River Tyne above Haddington. We may need an ice-breaker if the weather continues on the current course.

Big thanks to Pam and the class-room assistants from Musselburgh Grammar for getting the pupils out.  And well done to the pupils.  I’m sure these session have helped develop their team work and built up their confidence dealing with challenging situations. They have been a pleasure to be out with.

Musselburgh Grammar S3 Geography had a great day out exploring rivers and coastlines in East Lothian.

The day started out with a waterfall session on Billsdean Creek followed by a walk downstream to explore the shore – fossilised trees were spotted as were textbook natural arches.

Rather than brave the crossing of the A1, a shortcut under the road was taken! 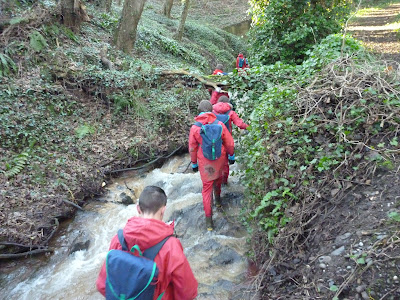 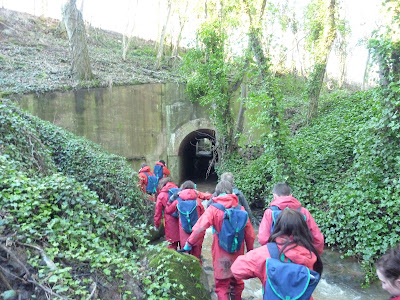 Moving on to Hedderwick Burn, lunch was taken in the tipi tent and some after lunch slacklining before moving on to study the meanders at in the lower course of the river. 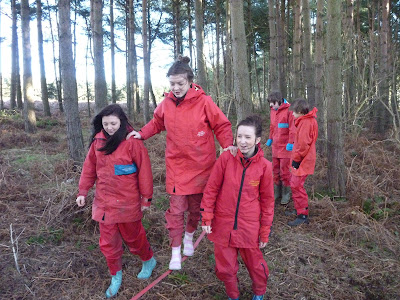 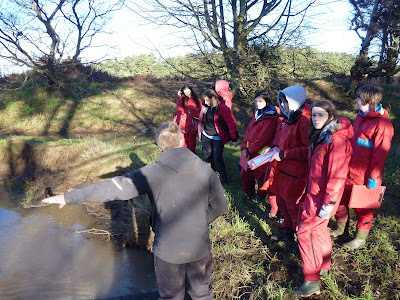 A great chance to see at first hand some of the features the class have been studying in class – and the sun shone!