A group of 8 S3 pupils have been out on a program of Adventurous Outdoor Activies called ROPE being delived by the Outdoor Learning Service.

On Tuesday the group visited the climbing wall at Tranent, where they learned the basics of indoor-climbing and peer belaying. Yesterday the group travelled down to Lothain Edge above Dunbar where they competed on a Orienteering score course. Conditions yesterday were pretty challenging. Very poor visibility (less than 20m at times) meant that the teams needed to really focus on their contour interpretation to get home that night – let alone finding controls!

The course had a 40 minute time limit with a penalty applied for over-runs. So the challenge was to plan your route to gain as many points (by finding controls), and loose as few by not overuning. In the end Eilha and Eilidh Mc were victoious. While they didn’t score as high as the other teams – they incurred the least penalty points.

Click here for results. And sorry … if I’ve made a mistake in here … just give me a break, with two Elidhs and an Eilha it can get confusing.

So that was the R for rock-climbing, followed by O for Orienteering.

Next week it’s P for Paddling, a canoe trip. Followed by the E (which I intended to be for Explore (but the pupils seem to believe stands for Enything – but will probably be a gorge walk.)

Friday was the final day of the Knox’s S2s R.O.P.E. Challenge delivered by East Lothian Council Outdoor Education Service …. and the E is for Exploration. The team had chosen to travel over to Fife to do the Chain Walk near Ellie. 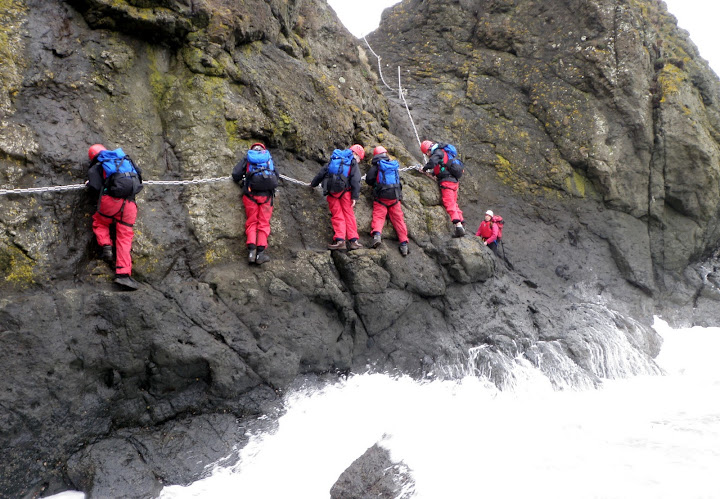 The route allows you to explore a number of inaccessible bays around Ellie Point, reached by rocky scrambles just above and in the intertidal zone. Several of the trickier climbing sections have fixed chains; and it’s for this reason the route is often jokingly referred to as Scotland’s mini via ferrata.

The forecast of wet and windy weather … was accurate, we got both. While the climbing was technically easy, the rock was slippy and wet. So, on the traversing sections, the climbers protected themselves by clipping slings attached to their harnesses onto the chains. On the longer vertical sections a top rope was used for security. Despite cold hands the group were kept focused by the climbing tasks. This, and the waves crashing about our feet, meant there was never a dull moment!

For this group of eight Knox S2 pupils today was the last of a four session adventurous outdoor activities program called the R.O.P.E. Challenge. The first session, Rock-climbing was at the climbing wall at Tranent. The second, Orienteering was navigation in the Lammermuirs , the third Paddling was a canoe journey. This final Exploration day has allowed the group to travel further afield and to put into practice some new skills and the teamwork developed in the earlier session.

This short program has given these youngsters some new outdoor skills, put them into situations that has challenged them, developing their confidence – but above all it has hopefully whetted their appetite for further outdoor adventures.

If you took part in this prorgam your parents will be sent a letter and a certificate. We would also really appreciate if you could fill out the online feedback form.

(For future reference … the drive from Tranent is about 2 hours, it’s 30 minutes walk to the start. We started the first chain at 1pm, which was about as early as we could after a 11am high tide (a 4.0m at 11am at Anstruther). The last chain was completely clear of the water, we completed the last section by 15:00, back to the bus by 3:30. So total time, bus-to-bus with no stops, was about 4 hours)

Monday was day three of Knox Academy S2’s R.O.P.E. session .. and P is for Paddling. We put in above the Aubigny in Haddington and paddled up to the lade before Clerkingtons’s Mill

The day had been very wet and windy in the morning, while we had the odd shower, the afternoon mostly felt like the first days of Spring.

A couple of options for ROPE day four, E for Explore , were discussed around a fire and hot chocolate. In the end the group have chosen to travel over to Fife on Friday , walk along the beach and around the Elie Chain Walk, the tide is right … let’s hope we get more of this fine weather.

The ROPE Challenge is a program of adventurous outdoor activities provided to Knox Academy by the Outdoor Education Service supported by Active Schools .

ROPE stands for Rock-climbing, Orienteering, Paddling and Exploration. The first three sessions introduce participants to different land and water based outdoor activities. While these are short sessions , the key skills of the activity are covered and they are intended to whet the appetite for future particpation.

The final, Exploration session, is designed to be ‘pupil-led’, with participants provding input to selecting the venue and activity from a choice of options – based on their experiences to date. A key feature of the program is to keep the session content flexible, making the best of conditions on the day; within the bounds of the guidlines and risk-assessments. For example, the day planned for Orienteering coincided with the best snow conditions seen in East Lothian for many years, so we went skiing. To see all posts tagged with ‘Rope’ … Click here.

The objectives of program are …

At the end of the program all participants are provided a completion certificate listing the activities attended. The first program was run with a Knox S1 group over the winter, and based on this success is being extended to an S2 group through to Easter.

Friday was the fourth and final ROPE sessions for the Knox S1s. It was an early start and off to the Ben Lawers mountains for the day. The plan had been to climb Meal nan Tarmachan, unfortunately the road up to the Ben Lawers visitor centre was too icey to drive up; and walking from the bottom was too long for the time available. So ‘Plan B’ was a walk up and around the corries – with plenty of opportunty to practice winter skills en route.

The group learned how to use an ice axe to move around on the slopes, how to cut steps and how to SAFELY arrest a fall.

An excellent day; cold, but clear, with occasional show showers.

For a movie with sound click on the image above, for a better picture quality slide show click here.