A class from Ross High ASN continued with their once a week canoeing on Musselburgh Lagoons today. As well as practicising the skills of canoeing they also took the opportunity to continue their numeracy work looking at numbers and counting skills. We were also able to do comparison of size by looking at who had collected the largest pile of pond weed.

A great day on the water and a pleasure to be able to bring a context to counting for all the pupils.

Three days of fun with the pupil from Ross High who were awarded the most merits throughout the year. 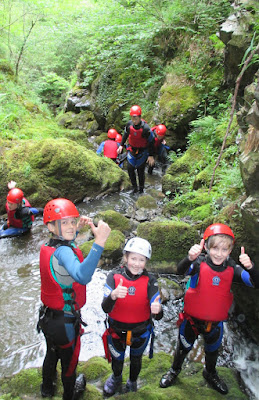 When I met the group for the first time in the morning I asked them how they were feeling about the idea of going Canoeing. There were a few hands raised to say that they were quite nervous. I was so pleased that by the end of the day though as everyone was saying that they had all had a brilliant time and that they would all like to do it again.

We started by heading to Musselburgh lagoons where we practiced a variety of strokes that would allow the boat to be steered. This is also a great location to build up some confidence about the equipment they would be using and how it will keep them safe. So with some games played, a short journey undertaken and a few people getting a bit wet (everyone fell in) we packed up and travelled on to our next location, The River Tyne in Haddington.

We arrived at the River Tyne and by now everyone worked as a well-oiled machine to get the equipment ready for the session. We were on the water in no time at all. We then went for a journey upstream until we could not get our boats any higher. Along the way there was a bit of splashing and some fun little challenges to undertake (like the limbo under low branches). They even managed to stay clear of the weir that they all thought they would go down if they weren’t careful.

The second day of the merit pupil’s activities was to do some gorge walking and then some kayaking. Unfortunately time was not on our side so we had to leave the kayaking for the afternoon and just undertake the gorge walk instead. 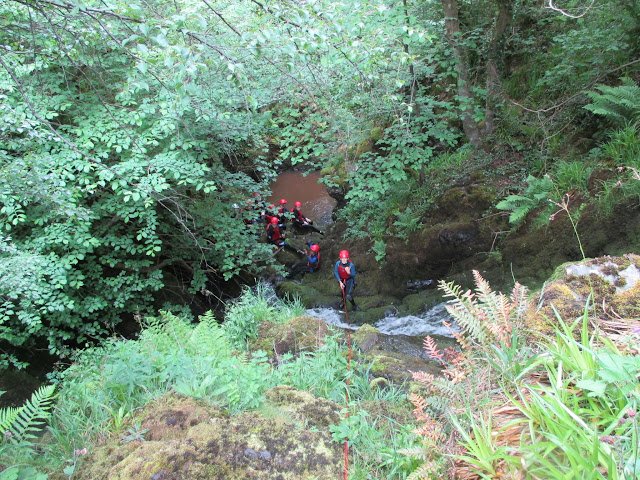 The group were fantastic and undertook the activity with huge enthusiasm. In my initial brief to the group I always emphasise about the importance of working together to get through the gorge safely and effectively. I was so impressed with the way they took my advice and supported each other. There were some really strong characters within the group which made a huge difference as moral can drop quite a bit when you are sitting in a cold pool of water waiting for your turn to climb a waterfall.

When it came to the two waterfalls where the harnesses are required the group were patient, supportive of everyone and really keen to give it a go. They completed the gorge really well but unknown to us was that we were going to have our toughest challenge of the day when we got out of the gorge on the return walk. Unfortunately an existing injury to one of our group meant as a team we had to help her back to the bus. Again the group were fantastic in trying helping and after trying a few different assisted carries (involving making a rope stretcher) we managed to all get back to the bus and finish the day. We may have been a little bit late but we had a great time along the way.

With the same activity the day before I had a fairly good idea about how much time we would be able to have and was quite aware that we probably not going to be able to do the Kayaking again. I made this known to the group and unfortunately this was the case but again this was not down to a lack of enthusiasm and motivation from the group.

The gorge is a very special place. Unfortunately (or fortunately! – ed) one of the things that make this such a special place is how inaccessible it is. The walk to the gorge is probably the toughest part of the day. There is then the challenge of walking up stream to where it gets steeper and ropes are required. Finally once this truly beautiful location has been conquered you then have a bit of a slog to get back to the bus. 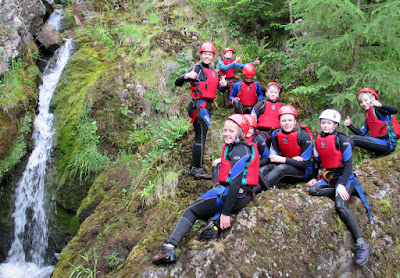 There were many different occasions where the group helped each other with either verbal encouragement or hands on physical support. However my personal highlight was when once each of them reached the top of the first waterfall climb they then began creating a human dam to try and cause the waterfall strength to increase when they all stood up. Not very supportive but very funny at the same time.

By the end of each day every participant on all the activities worked really hard and had succeeded in completing some very tough challenges. They had to overcome physical obstacles while managing their feelings effectively. However it should not be forgotten the hard work and effort that went on throughout the year for them to earn this reward. Well done to everyone.

It was a pleasure to welcome Ross High – Higher Physics class – to Foresters Park Climbing Wall in Tranent for the two hours of their science period on Tuesday morning.

They walked to the wall straight from school and split into four groups – looking at Forces and Equations of Motion in a Climbing Wall.

The pupils were required to design experiements that would enable them to:

The pupils were all thoroughly engaged and gave fantastic feedback to their science teacher – Mr. Laud. Along with the school we are looking to make this lesson an annual one in the higher physics curriculum.

Many thanks to Mr. Laud for his development of the session and the higher physics class for their enthusiasm. If there is any other school out there that would like to develop lessons similar to this then please get in touch with your Outdoor Learning Service

Ross High School ASN pupils have continued this year with their weekly visits down to Musselburgh Lagoons to enjoy some time on the water in canoes. It allows staff to have the one to one time that the pupils require but in a unique and stimulating environment.

This programme is organised by Mr Muchall from the school and Keith here at Outdoor Learning. The school staff support all the pupils and have a cracking time on the wtaer themselves as can be seen from the smiles in the photo  above.

These afternoons are also supported from the community and provides links to further opportunities for pupils. Supporting partners include Beyond Boundaries East Lothian – Steve Nelson and Councillor John Williamson.

The pupils have been involved with canoeing and/or kayaking dependant upon their ability.

The ASN unit also organise an activity day every May at Musselburgh Lagoons involving East Lothian’s Beyond Boundaries East Lothian (an Adventure Club for those with disabilities and mental health issues); East Lothian Council’s Outdoor Learning Service and Calvert Trust.

During this day pupil’s have a chance to try a variety of activities including canoeing; kayaking; sailing; archery; blo-karting; cycling; bushcraft. Silver Award Duke Of Edinburgh students engaged in a weekend of training in preparation for their expedition. The three days of training (Friday to Sunday) consisted of rescue training – getting very wet; HSE One day Emergency First Aid course; Trip along the coast from North Berwick with some wet launching and landing exercises toward the end of the day.

The pupils were engaged all weekend in varying weather conditions – rain on Friday through to bright sunshine and sea breezes on Sunday. The level of paddling skills of the group was of a very high standard and I am very much looking forward to helping them achieve a successful expedition. The paddling competence of the group is such that we will be looking to ensure that they are paddling on the sea – somewhere on the West coast is likely – group yet to decide. 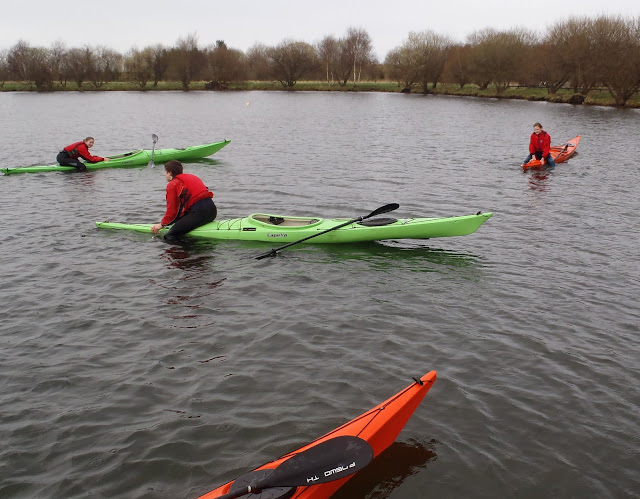 Thanks must go the school staff who continue to geve fantastic support to their pupils’ endeavours. – Mr Laud; Mr Gill; Mr Berry this past weekend.

This group require a DofE accredited assessor for their assessed expedition in August /September 2012. Please post a reply if it is something that you would be able to commit to.