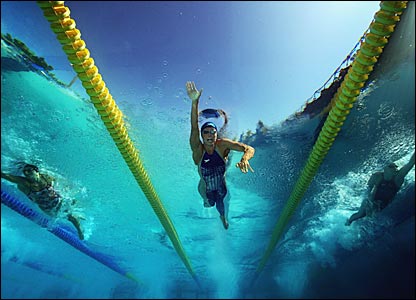 It was the Swimming Club AGM on Monday.  And yes, I’ve finally managed to get myself off the committee.  We bludgeoned and battered and locked the door.  There was no escape.  We have a new, EU-style committee.  No one wanted to be big chief – no one ever does – so they’re going to take turns, a well-oiled chair rolling around the room.  Once we’d agreed that we could manage without a President, Chairman, figurehead, whatever you want to call it, there were plenty of willing volunteers.  I think it will spread the work load much better, without everything defaulting to one individual and without any one person feeling responsible for everything.  Here’s hoping, in any case.   And enough people have stood for the committee that, even if a few fall by the wayside as their children get bored of swimming, we should get by.

There’s a frightening amount of organisation required for children’s clubs these days, much more than was ever required on my days on adult sub-aqua club committees.  The only bit most people see in swimming is the apparently thankless ploughing up and down a swimming pool several hours a week.  A few go to competitions at weekends.  To get to this point there are coaching programmes, coaches (mostly volunteers) to be found, encouraged and trained, parent helper rotas, bronze medallion training and cover, pool bookings, membership fees, dealings with the governing body (ugh), competition entries, membership databases, results databases, child protection issues, Disclosure Scotland, social activities, kit, discipline, registers, newsletters, communication with parents.  Oh, and there’s coaching development, otherwise known as ridiculously expensive, poorly taught, time-consuming and difficult-to-get-on courses at times unsuitable for volunteers.  (Not that I’m bitter and twisted or anything.)

Then there are the children.   There are those who listen and do everything you ask of them and more, teenagers wanting to “help”,  difficult 7 year olds who are just starting out, prima donnas, rascals and children who are only swimming because their parents insist.  There’s a huge satisfaction to be had from seeing individuals make progress and succeed, in swimming and behaviour.  But as soon as you miss one step along the way, or mislay a piece of paper or treat one child differently from another there’s a parent waiting to jump on you from a great height.

So it was with great pleasure that I was able to say that I’m looking forward to carrying on teaching the little ones because that’s something I really enjoy but that I’m not going to organise another rota or write another newsletter.  For all those accusing comments at the AGM – “Why should I pay xx when it only costs xx” and “Why hasn’t yy been done” in that particular tone of voice which implies deep disapproval – I could happily say “That’s for the next committeee to deal with and I suggest you stand for election”.   Whoo hoo!

We’ve staggered through the past year with several things achieved – notably appointing a paid coach, which has rescued the club – but with a hiccup or two along the way.  Half of the committee stood down or, more accurately, disappeared during the course of the year.  And with broken ankles (don’t exaggerate – ankle), the head coach on maternity leave, a major family crisis for our other main volunteer coach, surgery/chemotherapy, we’ve managed by fire fighting but without time even to show anyone else what needed doing.  We’ve managed mostly thanks to people without children in the club,  particularly coaches but including the treasurer whose son stopped swimming earlier in the year.  Too good at rugby, unfortunately.

Now the club can move forward again and things are looking very promising.  It’s our 25th anniversary this year and we’ve ordered some silver swimming caps to mark the occasion.  Anyone want one?

But then, no sooner was the swimming club sorted than the children came home from badminton with a note.  Emergency meeting.  The club will fold if a new committee doesn’t come forward.  Mother sighs and ducks under the duvet.  Perhaps if they can’t see my face they won’t realise I’m there.  The boys really enjoy the no pressure, very social badminton that they play.  I’ll go to the meeting but I do just hope that enough other parents come forward to run the club; it’s not nearly as involved or demanding as the swimming club but it’s definitely someone else’s turn.  The trouble is, parents fall into two groups – those who are prepared to be involved and those who aren’t.  Those who do tend to cover several committees.  It’s a conundrum which I suspect will never be resolved.

Post script:  On further thought perhaps the two groups are parents who get involved and parents who prefer to keep their house clean.  No guesses which group I’m in.   Now, does anyone know the number of one of those domestic oven cleaning companies?