It’s one of the best sort of Saturday phone calls to get.  “Are you doing anything this afternoon? Would one of you like a balloon ride? There’s a spare place!”  (I was just typing “Someone’s dropped out” but thought that might not be too appropriate.)  Four of us into one place. Hmm.  GP1 wondered why we might even consider that he’d be interested and so then there were three.  “Why would I want to do that?”  To be fair, he truly hates heights.  Well, I gave in and just pulled rank. Someone had to make the decision, tough though it was.

Pete, partner of our diving friend Sue, runs Alba Ballooning and was planning on flying – or should that be floating? – from the edg e of the Pentlands that afternoon. And what a glorious, clear, sunny afternoon!  We took off from near Easter Howgate, to the east of the Pentlands and flew east and northish across Midlothian. There were spectacular views of Edinburgh and Arthur’s Seat, the Firth of Forth, the Pentland and Lammermuir Hills and across East Lothian to Berwick Law and Bass Rock.  It was quiet and still as we drifted along. Quiet, that is, until a  farmer with high blood pressure accosted our following cars and threatened to shoot us down if we so much as thought of landing in his field.  I wonder if he knew that we could hear him from the basket? It’s just as well that Pete knows all the friendly natives and all the nooks and crannies of the area, and had no intention of going anywhere near his land.  We drifted peacefully on and landed, with only a little bump, somewhere far more welcoming.

I’ve never been in a balloon before and found it quite different to my preconceptions.  Because the basket drifts with the wind, there’s no wind chill. There’s no wind on the face.  Duh! So there was very little sensation of movement and, as the basket sides are quite high (at least if you’re as short as I am) there’s no real feeling of height or exposure.  It was like standing on a mountain and looking at the view. A moving mountain, of course.  I’d expected it to be cold, but with no wind it was pleasantly warm.  And I hadn’t even considered that we might get a glass of champagne at the end.

It was a great afternoon, so thank you, Pete and Sue.  And thank you GPD and GP2; I’m sure helping put the balloon up was almost exciting as flying. Wasn’t it? 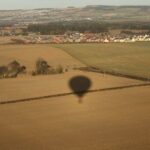 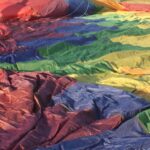 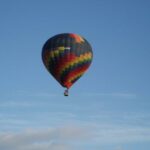 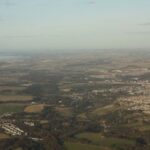 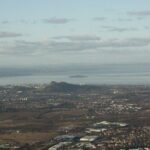 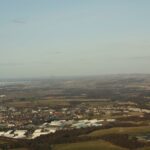 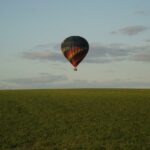 There are a few photos here but lots more on my Flickr site.