We’re celebrating, but in a slightly muted way. A friend has just asked “Is it joy or is it relief?” It’s relief, I think. Of course it’s wonderful that I’m in remission again. The consultant, though, was at pains to stress that the cancer WILL come back – we just don’t know when. The longer I have clear the better, as the more chance there is of another round of treatment being successful. My body needs time to recover from this lot, for starters. We’re into the wait and see, with check-ups every three months and the knowledge that I’m unlikely to revert to six month intervals, let alone ever be signed off as clear. I am still coming to terms with the fact that I will be living with cancer for however long I last; I suspect that this may be even more difficult for the rest of the family to accept.

One of the problems of finishing chemo, that I remember so clearly from last time, is the transition END_OF_DOCUMENT_TOKEN_TO_BE_REPLACED

So my hate – hate relationship with the CT Scan Department continues.  My first encounter with this smiley, all singing dancing department is buried in the mists of that inital diagnosis four years ago. Buried but not lost. I remember vividly the absence of any suggestion in the letter I was sent that might have warned me I would be spending several hours in the department. I also remember waiting for maybe an hour in one of those unflattering gowns in the equivalent of a corridor with no idea what was going on. I particularly remember leaving in the early evening in a truly foul mood, worrying about the children I’d abandonned for far longer than planned.

Scan No 2, last summer, was more straightforward but perhaps more fraught. With No. 1 they weren’t expecting to find anything and indeed it was clear. No.2, on the other hand, was most definitely looking for something and sure enough, they found things. Ho hum. Hardly the fault of the CT Dept, of course – they were only doing their job, finding what shouldn’t have been there. But a smile or even some eye contact from the receptionist might have helped things along.

Scan No 3 came in the autumn, following the clearing out of all unsavoury abdominal bits. For the benefit of readers END_OF_DOCUMENT_TOKEN_TO_BE_REPLACED Chemo days are long. They start in the middle of the night, 6 hours before the appointment, when I have a lonely midnight feast with a handful of steroids. Middle of the night feast, of course, not midnight. Do you remember those midnight feasts when you were little when you and your friends would hide away a bundle of sugar-hit goodies, and of course it was a secret and your mum didn’t know, but then you couldn’t last until midnight? Either you tucked in to the goodies at 10 o’clock, torch under the blankets, or you woke up in the morning and it was all still sitting there.

Anyhow, back to the chemo. My appointments at the moment are Mondays, and have moved from 9am to 11am. The 11am bit means I can get up at 6 to take my tablets, rather more civilised than midnight. Why not 5? Unfortunately the Monday bit means I have to get my pre-chemo bloods done on Friday, three days ahead, rather than the preferred 24 hours before. The way this drip-drip poison works is to kill off every fast growing cell it can find. Subtle, eh? Fast growing cells include END_OF_DOCUMENT_TOKEN_TO_BE_REPLACED

Toilet paper manufacturers of Great Britain can relax. I won’t be dispensing with their services just yet. In fact, the way things are right now, I might even consider buying shares. It was two weeks ago today that the knife went in and I’ve been home from hospital a week. The staples are out – if I thought I had a long line of piercings last time, they were even more impressive this time around.

It sounds like they had a good guddle around while they were in there. It turns out that CT scans aren’t hugely reliable – I had been warned about that beforehand – and so, although they found the lump that had showed up on the scan, they also found all sorts of other undesirable stuff. They had gone in, this intrepid duo, with the intention of clearing out 100% of whatever they found, whatever it took. I’d been warned. In the event, they found lots of tiny spots of ovarian “disease” (sounds so much more manageable than cancer, doesn’t it?) all over the peritoneum and what was left of the omentum.  This was very typical of ovarian disease, they reassured me. Did I find that reassuring? Take a guess. They took out as much as they could, around 95% they estimated, and figured the chemo would nail the rest. I spent some time trying to identify the good news in all that but without much success.

The one bit to cheer me though was END_OF_DOCUMENT_TOKEN_TO_BE_REPLACED “Well, at least it wasn’t a good one.”  Spoken whilst rootling in the cupboard for the dustpan and brush.  Again.

In fact, when I stop and think about it (although as a rule it’s probably better not thinking too much), I’ve broken more plates and glasses in the last six weeks than in the previous ten years.  I think it must be due to this peripheral neuropathy.  Numb fingers and toes to you.  END_OF_DOCUMENT_TOKEN_TO_BE_REPLACED 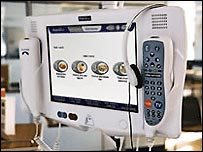 Patientline is the communication system that is installed at each patient’s bedside in the ERI.  It provides a personal telephone number, television, radio – and internet!  Woo hoo!  It took me a day or so to discover the internet function and a little longer to get onto Edubuzz (I like the new look, by the way!) and guineapigmum.  So I saw a couple of good wishes people had put on my blog and it cheered me up.

Once the morphine fog cleared a little, I thought I’d have a go at responding – and then it all ground to a halt.  Interminably slow connection speed, a keyboard with letters that didn’t work, most of the blogs that I read regularly blocked and a brain that wasn’t functioning.  What, I wonder, is wrong with Mother at Large, Not wrong, just different and Reluctant Memsahib? Are they full of scurrilous material, likely to raise the heart rate of patients to a dangerous level?  Anyhow, I gave up and resorted to less challenging pasttimes – the Archers and the insufferably perfect Nigella (although I have made the chicken pie she demonstrated since coming home, and it was pretty good).

I wondered, though, if this is what it is like trying to use the internet in schools.  Slow, broken and blocked.  I hope not.

Home again, and recovering, I’m the owner of a line of body piercings that a punk w

ould be proud of or a Goth would die for.    I knew I was on the mend once I started composing blogposts in my bed instead of trying to work out which body part hurt least and so could be moved first.  Unfortunately, once the morphine wore off, those wonderful essays I’d written did too, so I’m starting from scratch again.

What I can’t understand, now it’s all over, is END_OF_DOCUMENT_TOKEN_TO_BE_REPLACED

Thank goodness for S1 Biology.  I’m prompted to write this as I was told that I didn’t put enough information in my earlier, rather too oblique post, so I thought I’d fill in some of the gaps.  Read on if you dare.  S1 Biology fortunately made telling the boys what’s going on a lot easier than it might have been.  During GP2’s (boy, 12 yo remember) cross examination of me last week, we had this exchange: END_OF_DOCUMENT_TOKEN_TO_BE_REPLACED

Mother at Large is becoming a book!  As an older mother myself, I’m well impressed.  And on that note (the older mother one) I’m contemplating running a sweepstake on the number of people who comment on my grandchildren when the boys come to visit me in hospital this week.  Always assuming they come to visit, of course!

Life just isn’t fair sometimes.  I mean, I know I half expected to be hit by a bolt from the heavens as penance for missing GP1’s birthday.  But I didn’t really anticipate taking a full on blow.  And for goodness sake, I’m here after all, at home, not away. I am going to make a birthday cake today and another next week for GP2.  The birthday present is already secreted in the house and next week’s is in the post.  So it can’t be that.

But it is most definitely not fair.  Just as I was getting myself going again after sitting around on my behind most of the summer, I find that I need to endure more bed rest courtesy of the NHS.  Last time they gave me some extra bits to take home.  This time END_OF_DOCUMENT_TOKEN_TO_BE_REPLACED