Skip to primary content
Skip to secondary content
In class this week I alluded to the belief that to take Nietzsche’s comments about women (in the GM or indeed any other text) as merely the expressions of a ‘man of his time’ was a mistake. In fact this (mistaken) view is exactly the one attributed to Walter Kaufmann by Kelly Oliver and Marilyn Pearsall in the introduction to their Feminist Interpretations of Nietzsche. One of the things I always spend less time than I should talking about in class is the different interpretations of Nietzsche’s Genealogy. This is partly tactical, as it is more than possible to get a 7 without doing so but it is also because, I know the students often struggle with it.

Now that I’ve revealed myself to be an awful teacher who is afraid of a challenge (and that a proper covering of this area would take a whole term, perhaps more), I’m going to make an attempt to rectify my failure.I do so with the caveat that what follows is a gross over simplifcation, but at the same time is about the right depth for an IB Philosophy student.

The best place for a student to start on this would be to listen to Brian Leiter on Philosophy Bites. Leiter is, in a way, at the naturalistic ‘end of the scale’ of Nietzsche scholarship, belivineg that the best way to read the German’s work is by … At the other end of this scale there are what have been commonly referred to as ‘post-modernist thinkers’ and I plan to post on these later.

Though Richard White is certainly towards the latter ‘end of the scale’ it wouldn’t be fair to say he was right at the end of it. In Schacht (Ed.) Nietzsche, Genealogy, Morality (London: University of California,1994) he offers a brief interpretation of the Genealogy. 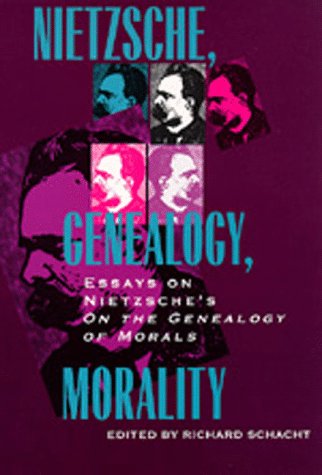 White thinks that we read Nietzsche best if we understand slaves and masters as ‘modes of being’ not as historiacal actualities. He defends this view by refering to the opening sections of the work where Nietzsche is highly critical of the ‘origins’ accounts of the ‘english psychologists’ amongst others. Having read the introduction, White suggests, it would be strange for the reader to accept what appears to be another ‘origins’ account simply because the origins are not as palatable. He encourages the reader to keep an ‘ironic distance’ from such a straighforward interpretation. That ‘slave’ and ‘master’ refer to ‘basic modalities of human existence’ is further supported with a referenct to the intruiging claim in the Preface that we must attempt to calculate the value of the values we have.

It is well known and widely agreed that Nietzsche has a concern with ‘perspective’ and White’s interpretation is related to the previous points. White understands ‘slave’ and ‘master’ as two ways of looking at the world. If this is true it does make sense for us to read Nietzsche as trying to inspire a ‘recollection’ of ‘mastery’ in human psychology, as White does. This position also seems to alleviate or simplify the question that is asked by most students on finished the Genealogy: how, then, should I live my life?

Quite consistently White reads the forst essay as a ‘mythical prehistory’ and so Nietzsche’s philology becomes understood as evidence for a shift in psychological states. To this he adds that Beyond Good and Evil seems to suggest that parents pass a tendency for either to their offspring – a doctrine rather similiar to contemporary readings of the Fall. This leads us to the ‘mixed blood’ that Nietzsche finds so distressing and predicts is capable of the extinction of the human race.

This interpretation fits very well with Nietzsche’s parenthetical, and seemingly passing, comment that

a prehistory which, by the way, exists at all times or could possibly re-occur (II§9).

This of course leads us to the question of action or what the ‘master’ should mean to us, Nietzsche’s readers. White interprets ‘slavish’ psychology to refer to any arrangement where individualism is impeded. He uses Nietzsche’s own examples of belief in God and science, claiming that the common emphasis on objectivity (both believed and sought) leads to what a psychologist might refer to as an eternal locus of identity. White claims Nietzsche thinks this is the position that ends in nihilism as it entails only a willing not to will. On the other hand a true ‘master’ would be characterised by ‘pure willing’, soveriegnty and autonomy. Finally this requires the complete rejection of teleology and embracing ‘artistc self determination’. This account is supported with reference to the ‘new philsophers’ of BGE. To become masterly we must

put…an end to that grusome dominion of nonsense and accident that has so far been called “history”. (BGE 203)*

Every so often I read (or start reading) a book that makes me read more by the same author. It”s not always because I agree with the writer, in fact recently it more often goes the other way… Julian Young’s The Death of God and the Meaning of Life was my most recent book like this… In fact it might be a very good addition to an IB philosophy reading list… 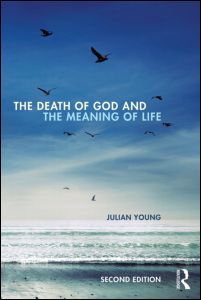 Both in this book, and his Schopenhauer, Young provides a seriously clear and useful definition that would be of use to any IB student reading Nietzsche for paper 2 or for anyone that would like to write something ‘a bit off the beaten track’ in their core theme question. I always encourage my paper 2 Nietzsche students to mention Schopenhauer in their answers and this book and that chapter explain very clearly why.

There’s an excellent section on what ‘will’ is and why it matters which may seem familiar to students of Freud. Best, perhaps is the description of Schopenhauer’s case for pessimism. I’ll return to both these books later but for now here is Young quoting Schopenhauer making a case for the creulty of nature. This point could also find a home in a philosophy of religion essay…

Okay so not Nietzsche, but perhaps his Genealogy… I’m always trying to get my IB philosophy students to summarise difficult passages in t shirt slogans… it’s a bit lame but it totally helps them to be brief and precise enough to get ace marks…

Anyway I recently discover this phrase in one of the old IB marking schemes, and I kinda like it…

The ‘strands’ of which it speaks are the threads or elements that are woven together in Christian (Western?) morality and, as it says, Nietzsche’s mission is to show that each of these threads has a non-moral origin. Thoughts?

so I know I sometimes see one thing I like in another thing I like…. this may be nothing more than that but it does seem to capture some of the spirit of what we’ve been reading…

Into the night, Desperate and broken,The sound of a fight….We were the victims of ourselves…. We stole our new lives, Through blindness… The age of man is over, A darkness comes….These lessons that we’ve learned here, Have only just begun….

I’m a bit of a big fan of Alasdair MacIntyre. His Short History of Ethics carried me through my studies at university before reading After Virtue and then moving in a slightly different direction. Here he describes Nietzsche’s criticism of Kant very clearly. I would have this discussed in any IB or A Level essay on Kant’s Ethics:

…Nietzsche’s accusation is that in fact Kant assumes what he sets out to prove. He takes it for granted that we are entitled to make moral judgements and enquires what must be the case if this is so; he never asks, as Nietzsche does, whether we are so entitled.