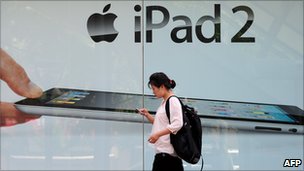 Five people have been arrested in southern China after a teenager sold his kidney so he could buy an iPhone and iPad, state media have reported.

Those detained include the surgeon who removed the kidney from the boy in April last year.

The student is said to be suffering renal failure, according to prosecutors in Hunan province quoted by Xinhua.

Only identified by his surname Wang, he is said to have received about $3,000 for his kidney.

The 17-year-old was reportedly recruited for the illegal trade through an online chatroom.

Organ shortage
The case was discovered when his mother noticed the new gadgets; when asked where he got the money, he admitted selling a kidney.

The group behind the operation have been charged with causing intentional injury and illegal organ trading.

While Apple iPhones and iPads are very popular in China, they are priced beyond the reach of many urban workers.

And there is a constant shortage of organ donors.

Official figures from the health ministry show that about 1.5 million people need transplants, but only 10,000 are performed annually.

Executed prisoners have been often used as a source of organs, but last month China vowed to phase this out over the next five years. (BBC WEBSITE)