Friday October 28th saw our S6 pupils organise a fancy dress event for charity along a Hallowe’en theme line. Pupils were encouraged to dress up for the day and donate a £1 to charity at the same time – meaning the excitement of Hallowe’en could be channelled constructively.

Rachel Connachan of 6Gr2 was the driving force behind this event and deserves a lot of credit for her enthusiasm and will to make this work. Ably assisted by a range of S6 pupils and the House Team, this brought about a renewed enthusiasm across the whole school and record numbers of pupils participated. The following awards were made:

Traditionally, this event has always been Seton’s strong suit (led ably by their glorious leader Mrs Red-ertson) and Grange have usually given it a body swerve…but Rachel’s enthusiasm obviously rubbed off on her House Mates as Grange swept the boards.

An update of overall house points will be posted later in the week once we have all October House Points in from departments. 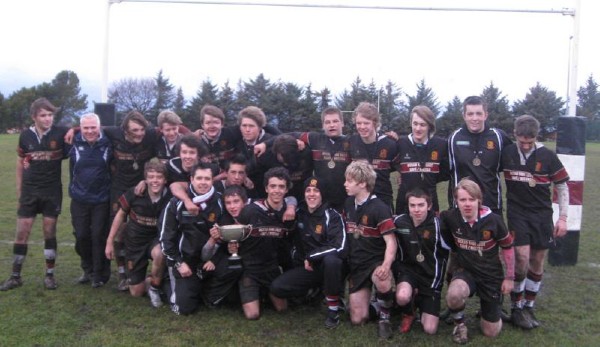 The House Captains are pleased to announce that the next house sporting event will take place on Thursday November 10th at 1pm when Senior School rugby sides from each house go head to head in pursuit of the title “Inter House Rugby Champions”.

Pupils from S5 and S6 who are interested in playing should speak to Michael McKirdy (Seton), Blair Robertson (Grange) or Finlay Hughes (Gosford) – or feel free to approach any of the other house captains, who will point you in the right direction.

Some of the said motley crew are pictured above playing for our local club side, Preston Lodge RFC – come along and give them your support on the 10th!

As it stands the experts are predicting a Grange win this time out but, as we discovered with the football, favourites don’t always prevail. Make sure you don’t miss out on yet another fantastic event organised for you to enjoy by your House Team!

House Captains should be reminded that, because of the Monday In Service day the House Committee/Captains Meeting will be on Wednesday October 26th at 1pm in LZ 5.

This will allow us to review the I’m a Panner event and discuss the forthcoming House Assemblies (next week). Jenna has kindly taken home photos from the last event to use in a powerpoint for assemblies but all captains are asked to attend this meeting as per usual. Grange Captain Berg’s expression, as she tries to down one of our many delicacies during “I’m a Panner Get Me Out of Here!” on the last Thursday before the holidays, very much says it all!

Our inter-house bush tucker trial caught the imagination of a great number of pupils and we estimate (from door entry stats) that over a third of the school were at the event. This is a fantastic endorsement of the hard work put in by the House Captains and House Committee team and much hilarity was enjoyed by all. Not everyone coped with the rigours of the snails, beasties and jellied creations though…eh, Thomas Stevenson (pictured above) of Grange who “struggled a little” at certain points in the proceedings. To say this was a messy affair would be an understatement. Thankfully, copious amounts of paper roll were on hand to clean up the aftermath! And it wasn’t always used for cleaning up gunk…

Staff star performers were Mrs Pike (pictured above) who did everything with her usual gusto for Seton, Mr Orr (also above, who wondered what on earth he had let himself in for when his Gosford team covered him in Andrex – other brands of toilet roll available folks) and Mr Tracey pretty much being a one man moule machine for Grange. The latter deserves a special mention for stomaching a dozen garlic snails in one go to ensure house points for his struggling blues.

At the end of proceedings Seton won the eating. Gosford and Grange were better supported and were acknowledged with points for this too.

Today at lunchtime your house representatives will be indulging in their own version of a Bushtucker Trial in an attempt to win much valued HOUSE POINTS!

Staff, House Captains and a range of year group pupils will take part on your behalf.

Come down to PE to cheer on your Grange, Gosford and Seton house representatives as they put pride before common sense…

The House Competition has begun again for another year, with Grange the defending champions and the others looking to depose them from their position…

The first whole house competition organised by our captains was the House Football Competition. This was played over the course of an entire week and various year groups fought for the title of House Football Champions 2011-12. Last year, Grange swept all before them and this was instrumental in their overall success in the competition…this year, however, another house was to prevail!

Seton were to dominate proceedings this time round, easily winning the competition outright having won a number of individual year group finals. Gosford finished second – as they did last year – whilst reigning football champs Grange finished humbly in third. How the mighty fell!

There were some worthy and noteable performances from a number of players and the referee (provided by Grange S6) came in for a lot of praise for his fairness and sporting spirit.

Well done to everyone who took part in this fab event and to the House Captains for getting the year off to a flyer.

Current points standings are as follows:

Science monthly points – with Grange coming out on top so far.

If you have achieved something exciting or prominent away from school and you think we may not know about it, please let us know. You will likely be in line for some House Points for your house! Last year a number of pupils kept their achievements quiet through modesty and we only found out through word of mouth. We are looking for pupils and parents to help us compile even more information on our students’ successes – let’s celebrate them!

On Thursday October 13th at lunchtime your House Captains will bring you our own version of a bush tucker trial as part of the House Competition. Names of participants have been drawn from a hat at assemblies and both students and staff will get stuck in to all manner of grubby grub in the name of their House and house points!

A full report will follow when we come back after half term…eugh!

Yesterday saw Grange celebrate their House Competition win in style with a fun afternoon of events! The clear winners in this year’s contest, all pupils in Grange were given an afternoon out of the classroom to enjoy “P in the Park”!

Stuart Wilson organised live music for the Grangers to enjoy in the sunshine, whilst staff happily painted faces blue – the traditional colours of Grange. A bouncy castle assault course, sumo wrestling and gladiator style jousting were among the other activities on offer for our successful students. Grange House Captain, Louise Dobie, showed off the winning colours to the assembled audience whilst Head of House, Ms Binks, made an impassioned speech about what it is to “bleed blue”.  And blue most certainly was the colour of the day… Mrs Thacker (above) one of the successful Grange teachers was game enough to get in on the act and joined in with the Sumo wrestling. A queue was ever present at this attraction  – as well as all of the others! Meanwhile… auditions for Braveheart the Sequel were in full swing. (Sorry Gavin!) 😉

The House Cup will be formally presented this evening to House Captain Louise Dobie at our annual school prize giving ceremony. The points collection, collation and verification is over. The people have spoken.

GRANGE HOUSE are officially House Champions for the session 2010-11!

A huge congratulations to all Grange House but special mention should go to House Captain, Louise Dobie (pictured here receiving the House Trophy with Ms Binks) who has been one of the driving forces on the House Committee this year. Other Grange House Captains involved in ensuring this year’s success are Christie Sinclair, Ross Currie and Cameron Donaldson. Louise will officially collect the House Trophy on behalf of all Grange pupils on Tuesday 21st of June at the annual school Prize Giving.

So many Grange pupils and staff contributed to their success this session and some notable ones included:

The House Committee look forward to meeting early into the new term in August to ensure the success of this year’s competition continues into next year. We hope that it will be even more competitive than the year just finished and are looking to widen further still the scope for participation and reward. Final departmental points are due in from teachers by the end of this week after which only one off events or recognitions will be taken into consideration. The competition finale will be the S1,S2 and S3 Sports Days at the end of the month. The House Trophy will be presented to the winning House Captains at Prize Giving in June.

Good luck to all three houses! 🙂

And apologies for the reference to a dodgy song by Europe, immortalised by Mr Thomas and Mrs Pike – I know it will be going round your heads now for the next 3 weeks! Sports Day for S1, S2 and S3 will take place at the end of the month and it is the final opportunity for pupils to win points for their house!

Points will be awarded for taking part and also for wearing house colours. If you want to give your House a chance to be part of the House Competition Winners Day event then you need to ensure you pay good attention to the more detailed information about Sports Day when it is distributed.

On Tuesday May 10th the points totals are currently standing at…