Please could all people on the France trip let their parents/carers/friends know that a daily update on the trip plus photos will be appearing here (if I can find a wireless connection).  3 days to go …  Mr McNeil

We were in the privileged position today (29/09) to be hosting performing Masai Warriors in school.

This opportunity came about as part of the ‘Going Global’ programme now in its second year of supporting Global Citizenship education and also touching on Expressive Arts, Geography and Languages. The Osiligi Warriors performed song, dance and jumping! They did lots of audience interaction, a Q&A session, powerpoint presentation and showed a short video. Pictured are some S1 pupils with the Warrior Troop.

Preston Lodge High School opens its doors again to the community on Wednesday June 1st as it showcases the Whole School Project for 2010-11 “The 1960s”.

All year, pupils have been studying aspects of the 1960s across the entire curriculum including:

The Open Day will show case this and so much more. On the afternoon of the 1st June there will be displays of all this work, performances of Hairspray the Musical by our S1 Drama Club and our Enhanced Learning Provision pupils, a market place where people can buy local produce, a 1960s menu on sale in the school canteen at lunch time. There will also be the opportunity to visit the Octopus’ Garden in the shade!

The afternoon session runs from 2-4pm and all members of the community are welcome.

In the evening, there is a 1960s concert being provided by our talented Music Department and people are invited to come along and enjoy our medley of 60s hits. From the Beach Boys to the Beatles and back again…tickets for this performance can be bought on the night. (See news from Music Dept on this site elsewhere)

They brought their PL passports to be stamped as they visited different Italian themed destinations throughout the high school. Italian activities included cooking pizza in Home Economics, creating an Italian village in CDT, Italian music, creating parachutes in science and much more!

The staff at PL are eagerly awaiting postcards to be sent by the P7 students, telling them what the enjoyed about their visit.

Some of our Italy project work has been displayed in the Lord Mayor’s Bar at the Gothenburg, as part of the Prestoungrange Arts Festival.

ALL MEMBERS OF THE COMMUNITY WELCOME

YOUR SCHOOL AS PART OF THE THREE HARBOURS FESTIVAL 2010!

Whether it be inspiration gathered from footage or images of Mohammed Ali or the artwork of Andy Warhol (and the above nicely combines both) we are sure that the umbrella topic of the 1960s is going to provide staff and pupils with a wealth of ideas for the coming whole school project.

With the anniversary of the current Preston Lodge “campus” very much in the forefront of our minds, the decade in which it was built should provide no end of materials for budding local historians. However, the advances on so many fronts during this memorable decade are far wider ranging than simply that of the construction of the finest educational establishment in Scotland…

In Literature, some of the winners of the Nobel Prize for Literature included the very illustrious names Samuel Beckett, Jean-Paul Sartre and John Steinbeck. The book and film “Kes” (which currently is playing as a stage production in Edinburgh) was produced in 1968, “To Kill a Mockingbird” was published in 1960 and and in 1967, SE Hinton published “The Outsiders”.

In Art there were a myriad of exciting influences for people to look to. In 1962, Andy Warhol famously exhibited his Campbell’s Soup Can image. Yves Klein and others brought about Nouveau Realism. Psychedelic Art reflected the social changes of the time and Photorealism evolved from Pop Art…and that’s just for starters! History is rich in the 1960s with the Civil Rights Movement in America, the Cold War, Vietnam and the Cuban Crisis all high profile. Like a script from Forest Gump, the events of this decade are world renowned and include these (again only a taster)

· Adolf Eichmann on Trial for Role in Holocaust

· Martin Luther King Jr. Makes His “I Have a Dream” Speech

· Six-Day War in the Middle East

· ARPANET, the Precursor of the Internet, Created

Music in the 60s dominated youth culture. The Beatles, Rolling Stones, Elvis, The Who, Mods and Rockers, psychadelic hippy music, soul, mowtown and popular music (pop) all were evident. Musicians were the heroes and icons that replaced the movie stars of bygone generations…

There are so many aspects of life in the 1960s that span across our curriculum and match up to things that we are already studying or interested in. If you are looking for inspiration please feel free to contact the Expressive Arts Committee. However, we are certain that you will all have fantastic ideas of your own that come under this broad umbrella theme. 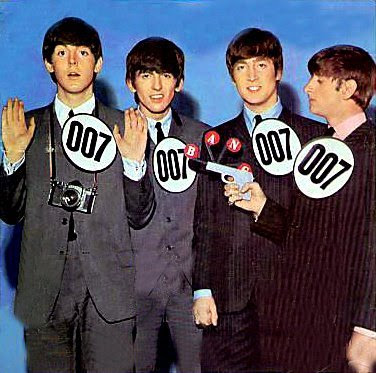 In the school session 2009-10 the whole school project will be based on the 1960s. Indeed we are simply going to call it “The Sixties”.

All departments will be involved in developing their own curricular input to this project and the Expressive Arts Committee are already working away on providing you with some suggestions in the form of a soon-to-be-published mind map. However, we are sure each department will be delighted to take ownership of their own ideas and plans.

Watch this space for a Whole School Project dedicated page on the website and details of dates, as well as ideas, from the Expressive Arts Committee.

Thanking you, love and peace man…

In May, Dave Purvis came into the school for two days to work with eight pupils on the art of coracle building.

The idea was to replicate the traditional craft of coracle building as closely as possible, Dave brought all the materials.

The laths for the frame are made from Ash, these were cut especially and soaked for three days before using them.

Once the frame has been constructed by interweaving the laths we covered the outer shell with Calico.

The Calico is stitched and made smooth.

On completion it is covered with 3 coats of bitumen and left to dry.

The paddles are made from broom sticks with an ash blade.

We then took the Coracles to Port Seton Harbour for their maiden voyage.

Flyer for On Our Doorstep Preston Lodge High School warmly invite you to our Open Afternoon on Thursday 22nd May 2008, from 2.30pm until 6pm.

“On our Doorstep” is our whole school cross-curricular project for 2008.

What will you see?

All parents and pupils welcome. Please enter by the Market Place.